apiUi offers some very important reports that will speed up testing activities.

Test coverage tells the degree to which the available elements of the api's are tested. The higher percentage of elements are tested, the lower the change that a bug is not detected. This report is helpful in determining whether or not your test is complete.
apiUi creates, based on the available operations, a kind of a super data-type and scans the log lines in the messages tab of the log panel counting which elements are used in these messages. In that super data-type enumeration values are treated just like sub elements. To create this report choose Log->Coverage report from the menu. 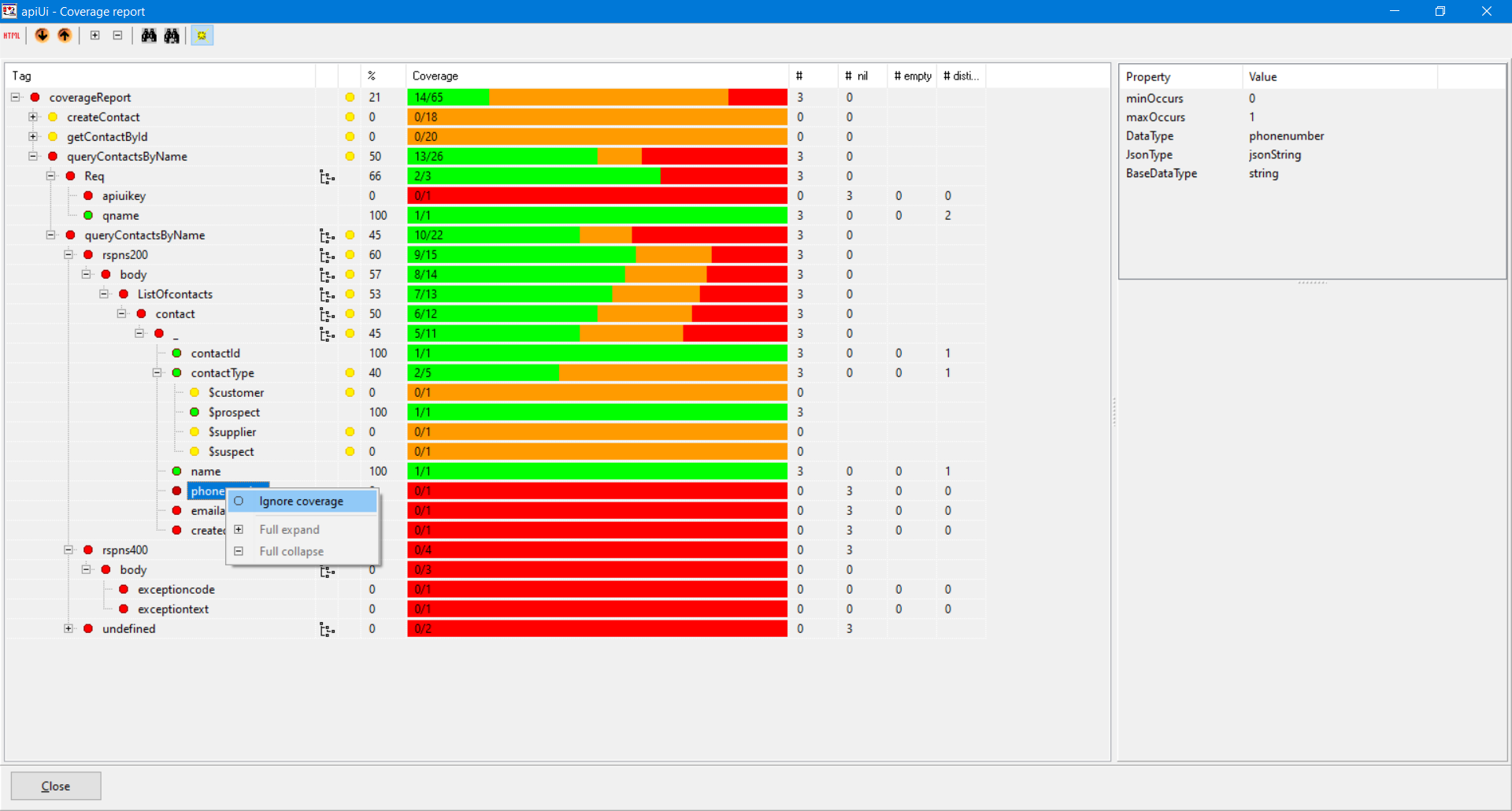 the apiUi Coverage Report. Easy to see that up till now only response code 200 is tested

Shows the structure of the super data-type.

Indicates that the item itself or somewhere in the down-line at least one item is ignored.

The percentage of the covered items.

The number of times the item was found in the log.

The number of times an item was not found while it's parent was found.

The number of times the item was found but contained no value.

The number of distinct values found for the item.

Open HTML version of report in the default browser.

Jump to next not covered element.

In most cases you will not want to test every available element or value. Therefor it is possible to ignore certain parts. Use this button to toggle visibility of ignored elements or values. Toggle visibility and you will see changes in the numbers and percentages.

Choose this context menu item for parts that you do not want to test because of lack of relevancy.
The orange color in the Coverage columns represents the share of ignored items. You can undo the ignorance of an item by the then available context menu item Take coverage into account. Note that changing ignorance of items means a change to your project design.

Most test tools support regression testing by letting test engineers enter expected values. A lot of work and probably most regression errors found this way will be due to errors in data entry instead of due to real bugs. apiUi uses a different approach. It uses snapshots to test if a certain scenario passes or fails. After the very first run of a scenario, all log lines are stored in a snapshot and manually checked by the test engineer. Each error found is reported as per the teams way of working and this first snapshot is promoted to reference. After deploying of the bug fix release, the same scenario is run again, saved to the same snapshot and, now automatically, compared with the reference snapshot. apiUi's regression report will now hopefully show only expected differences because of the corrected errors. If necessary, repeat the described steps. Fortunately, all of the steps in apiUi can be automated.

Suppose that the tester reports next issues after having run a test with some createContact calls,

The developer deploys a bug fix and the test is run again and the new snapshot is compared by apiUi with the reference snapshot.

The regression overview as shown by the apiUi GUI (find details here).

The left halve of the screen shows data from the current test run, the right halve shows data from the reference run and in the middle there are two columns with bullets, the left one is for requests, the right one for responses.
A green bullet tells no differences were found, red means at least one difference was found. To find out the exact differences, click on such a bullet and a details report will pop-up.

This detail screen shows how you would need to change the current message to become the same as the reference message. In this case the report shows intended differences only, so the bug was fixed successfully. This also means that this new snapshot is a good candidate to act as reference snapshot for next release of the system-under-test.
In practice it will often be the case that requests and responses will always differ because of timestamps and generated keys. For that reason the first comparison with the reference will most of the time show differences that can be ignored by the regression report. How to ignore certain changes is described here. Note that changing ignorance of items means a change to your project design.

For CI/CD pipelines an api exists (/apiUi/api/snapshot/checkregression) that reports ok/nok.

In some situations, e.g. when the system-under-test does parallel processing, the order of calls may differ from run to run. You can specify a sorting order so that apiUi will be able to match log-entries from current run and the reference run. A disadvantage of sorting is that an unwanted change in order of service calls will not be noticed.

Opens a form where you can maintain the ignored differences

Opens a form where you can maintain the ignored additions

Opens a form where you can maintain the ignored removals

Opens a form to maintain the extra sort elements

Jump to the next row with a difference

Jump to the previous row with a difference

Copies this overview so it can be pasted in a spreadsheet

Shows an HTML report in the default browser

Copies data to the clipboard so it can be pasted in a spreadsheet.

Find element on name or value.

6 Jump to next difference

Jump to next element that differs.

Jump to previous element that differs.

How to ignore certain differences

To ignore certain changes, use the context menu. Note that changing ignorance of items means a change to your project design.

Ignore differences for all elements with the unqualified name. Applicable mostly for timestamps and generated keys.

A more safe way is to ignore differences for the specific element. Applicable mostly for timestamps and generated keys.

Instead of checking for differences you can check if the value matches a regular expression.

Another alternative to check in case fields will always differ is to compare parts of the field.

Applied when a third system adds an optional field that has no impact for the system-under-test.

Applied when a third system adds an optional field that has no impact for the system-under-test.

Applied when a third system stops sending an optional field that has no impact for the system-under-test.

Applied when a third system stops sending an optional field that has no impact for the system-under-test.

Relevant when your system-under-test is multi threaded and you can not predict the order of calls to the virtualization solution. See also OrderOfMain.

Relevant when the system-under-test produces requests with unpredictable order within repeating groups.

The test summary is a HTML-report and contains three parts.

Reporting is done over the currently available snapshots.

In the snapshots tab, press on this button

Create report from a browser

apiUi can check if messages are valid according schema. See Schema validation for more information.
The most important place to see if messages are compliant with the schema is in the message logging.
For CI/CD pipelines an api exists (/apiUi/api/snapshot/checkschemacompliancy) that reports ok/nok.

From here you can search these documents. Enter your search terms below.